My mother passed away in 2003, just a few months after my grandfather did.

In Winter of 2001 she appeared healthy, jolly, and vibrant. She had even recently had cataract surgery and been prescribed a better allergy medicine.

kitchen stuff: A family running joke is that I buy my aunt an unidentifiable kitchen gadget each year as a Christmas present.

Penguin stuff: My mother consider herself half-penguin. She had a large collection of penguin dolls, toys, and books given to her over many years by family, co-workers, and friends.

our bathtub's dingy: Another family joke was that my mother needed to visit each of her children who were living on their own at least once per year, or they never would have impetus to clean their bathtubs. 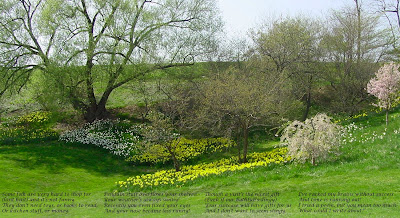 Some folk are very hard to shop for
(hint hint) and it's not funny.
They don't need toys, or books to read,
Or kitchen stuff, or money.

Penguin stuff overflows your shelves!
Your weather's always sunny!
Recently you even fixed your eyes
And your nose became less runny!

Though a visit's the nicest gift
(Even if our bathtub's dingy)
Your suitcase will have gifts for us
And I don't want to seem stingy.

I've racked my brains without success
And time is running out!
I tried a poem, but you mean too much—
What could I write about?