All the Picture Poems but this pair matched poetry to a photograph. My grandparents were worth extra effort. I knew what I wanted to say to them and painted the watercolor picture to go with the poems. Her painting is two trees, with two entwined branches.

January: My mother's parents met in elementary school. But they both had cooties at the time, and did not spend much time together. By the age of 19 they had been cured, and were happily married.

September: My grandfather had a saying, "You are not over the hill until you begin to gain speed." In 2001 they were retired and beginning to feel their age. Little did I know that my grandfather would pass away two years later, leaving my grandmother to live alone in "November and December".

April through June: My grandparents used to say that one secret of their very happy marriage was that his employment involved frequent week-long business trips. "Absence makes the heart grow fonder," my grandmother would say. "If we had lived together all the time we surely would have driven each other nuts." I would never have guessed this about them: having only seen them in the Autumn of their lives they always appeared to constantly enjoy each other's company. 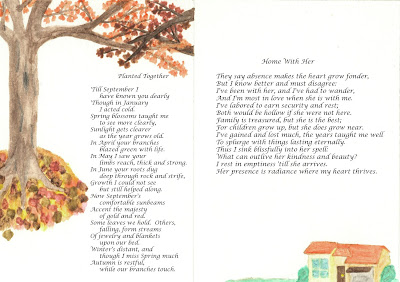 'Till September I have known you dearly
'Though in January I acted cold.
Spring blossoms taught me to see more clearly,
Sunlight gets clearer as the year grows old.
In April your branches blazed green with life.
In May I saw your limbs reach, thick and strong.
In June your roots dug deep through rock and strife,
Growth I could not see but still helped along.
Now September's comfortable sunbeams
Accent the majesty of gold and red.
Some leaves we hold. Others, falling, form streams
Of jewelry and blankets upon our bed.
Winter's distant, and though I miss Spring much
Autumn is restful, while our branches touch.